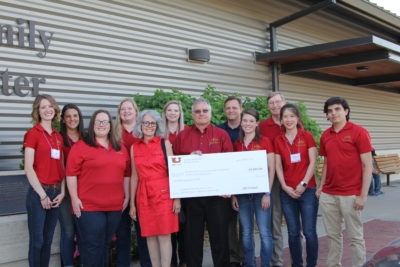 Dr. John Patience, with his wife and students from Iowa State University.

The John B. Swisher Leadership Award is an annual honor presented to an individual who exemplifies extraordinary leadership qualities and who has made an outstanding contribution to the advancement of the swine industry.

“We are honored to award Dr. Patience with the 2017 John B Swisher Leadership Award,” remarked Doug Webel, Ph.D., President and CEO of United Animal Health.  “Dr. Patience is a noteworthy leader in the field. His work with the students at Iowa State University is leaving a lasting impact on the swine industry.” 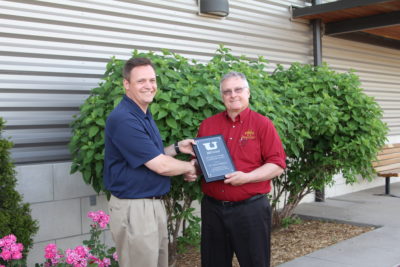 Dr. Patience, Professor at Iowa State University, is recognized nationally for his leadership in animal agriculture. For the past 9 years, Dr. Patience has worked in the Department of Animal Science at Iowa State.  Prior to that, he was the President and Chief Executive Officer of both PSC Elstow Research Farm, Inc and of Prairie Swine Centre, Inc.

“The impact that Dr. Patience has made in animal agriculture, and the knowledge and experience that he is sharing with his students at Iowa State made him the perfect candidate for this award,” explained Dr. Webel.”

“I am particularly grateful to Mr. Swisher and the legacy he has created at United Animal Health,” said Dr. Patience. “My students and I visited them at their head office in Sheridan, Indiana, and at that time Mr. Swisher joined us and shared his view of the history of the feed industry, his vision for his company and his enthusiasm for the future.”

“My students were struck by his generosity of spirit and his dedication, not just to his own family and his company, but also to the whole agriculture community. United Animal Health has retained this spirit and this perspective for all these years.”

As part of the honor, United Animal Health has contributed $5,000 to the Department of Animal Science at Iowa State University.