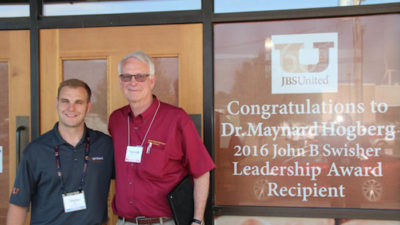 In 2007, Hogberg was named an Honorary Master Pork Producer by the Iowa Pork Producers Association. In 2009, he was awarded the Distinguished Service Award by the National Pedigreed Livestock Council. In 2014, Dr. Hogberg was presented with the Distinguished Service Award from the National Pork Board. Most recently, Hogberg led the establishment of the Jeff and Deb Hansen Agricultural Student Learning Center at Iowa State.

Hogberg has made incredible advancements for the swine industry, including assisting with the formation of both the National Swine Registry and the National Junior Swine Association. “Dr. Hogberg’s leadership and impact on the swine industry are remarkable,” said Doug Webel, Ph.D., President and CEO of United Animal Health. “We are grateful and indebted for his contributions.”

“I have always had a great deal of respect for United Animal Health. The company has made a significant impact on helping livestock producers be profitable through their feeding and management programs. Their history of being a service-oriented company has certainly made for a stronger livestock industry,” commented Dr. Hogberg. “To be honored by United Animal Health is truly very humbling.”

As part of the honor, United Animal Health has contributed $5,000 to the Iowa State University Animal Science Department.