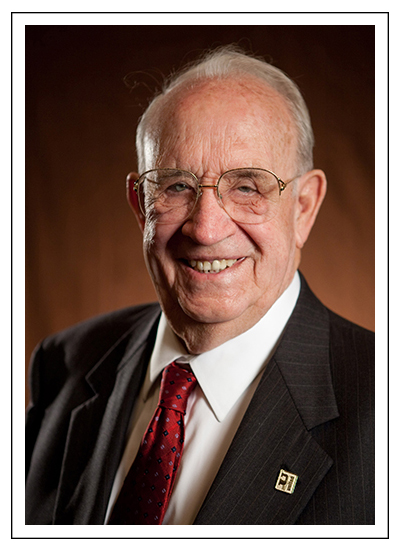 John B. Swisher often contends that it was only through the ignorance of youth that his company was started. With tongue in cheek, he will tell you that if he had been older and wiser he never would have attempted to launch his business at all. But the long-term success of United Animal Health (formerly United Feeds, Inc.) proves that he is not only an outstanding entrepreneur, but an excellent businessman as well. Mr. Swisher has led United Animal Health through many changes which have helped the company grow and prosper for 60 years.

Mr. Swisher graduated from the University of Illinois with a degree in Animal Science and he holds an Honorary Doctorate from Purdue University. He entered the animal nutrition business working at his grandfather’s company, Swisher Feed Company, but even then he had an idea for a new kind of feed company that would offer high quality feed at an excellent price, have representatives who were knowledgeable and honest, and would market directly to the farm.

In 1955, Mr. Swisher had the opportunity to test his idea when he was contracted by an Indianapolis packer, Stark & Wetzel, to start a feed division. Stark & Wetzel agreed to his proposal for a new kind of feed company, and Mr. Swisher began to build his dream. Just one year later, Stark & Wetzel decide to change course and eliminate their new venture in animal feed, Mr. Swisher was left jobless at age 26 with a pregnant wife and a two year old daughter. Taking a great risk which he now credits to the ignorance of youth, he gathered his visionary ideas and formed United Animal Health with 25,000 he borrowed from his parents and his mother-in-law.

The Beginning of United Animal Health

Mr. Swisher successfully launched his company – which at the time was a David among Goliaths – thanks to his ability to choose and retain excellent people, his knowledge of the industry, his skill as a salesman, and his sound business judgment. The company was founded on his belief that animal nutrition companies of the future would focus on a single species and would market directly to the farm, rather than through dealers. This concept was unique at the time, but it led United Animal Health to a position of leadership in an industry that had been dominated by giants like Cargill, Allied Mills, Pillsbury, Swift, Purina and Indiana Farm Bureau. He has repeatedly reinvented United Animal Health to keep the company vibrant and growing.

Few people have had as significant an impact on Indiana agriculture as John B. Swisher. After 60 years of industry leadership, Mr. Swisher has become an icon for what it means to be reputable and effective in agribusiness. He has served on the Boards of Directors of Indiana Pork Producers Association and the 4H Foundation. Mr. Swisher is one of only four recipients of both the Ernst & Young National Entrepreneur of the Year Award and a member of the Indiana Business Hall of Fame. He has also contributed and donated many dollars to local communities for various causes. Contributions have been made to organizations such as… Junior Achievement, various local universities and schools, Indiana FFA, First Responders, Lion’s Club, American Cancer Society, Indiana State Fair, the American Legion and many, many more.